I hope everyone's holidays were enjoyable!
We had a good time this holiday season.  This is the first year we actually celebrated Christmas.  Eric usually worked on the holidays so we always did something on a different day.  The boys also did not like wrapping paper so we would always unwrap all their gifts from others the night before and just have them sitting under the tree for them to play with the next morning.  But this year, Aiden started to talk about Santa and Eric had Christmas Eve and Christmas day off.  So we thought we would actually do Christmas this year. 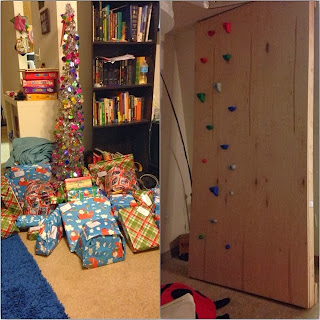 This was what the boys woke up to in the morning! 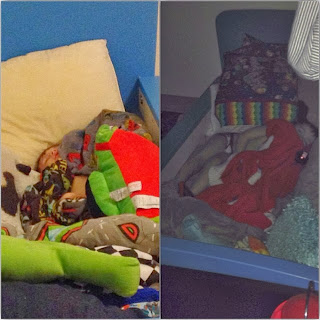 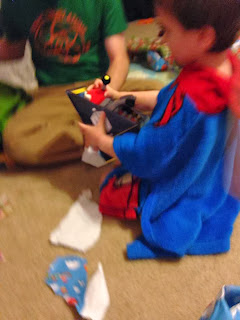 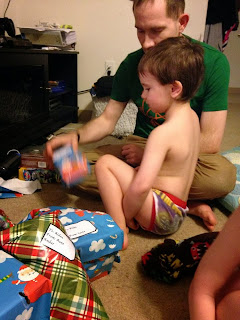 When the boys did wake, Aiden was excited.  He had huge eyes when we told him Santa came and could not wait to open gifts. Scott on the other hand kept saying "no."  I unwrapped all his gifts and he finally started saying something other than "no," and played with his new toys.
Both boys loved the climbing wall we made, with the help from Gigi and Popo (who bought the grips and supplied us with the gift cards to get the rest).
All in all our holiday was a success, not nearly as nerve wracking as I had thought it would be.  The boys have even handled the break from school and normal schedules really well.
I hope everyone else's holidays were a success as well, I know these breaks and times can be incredibly stressful, but we all do the best we can.  I would be lying if I said we did not have moments were we were pushed past our breaking points, we just try to focus on what is the best for the boys and us as a family and we make it through.
Posted by Cinnamon at 1:28 PM