Busy Busy Busy with nothing too interesting going on

I know I've been dropping the ball a little bit on keeping everyone updated and I apologize for that.  Things have been busy and hectic around here, so I am just going to start with what has been happening recently.
A friend allowed me to make a weighted blanket for one of her friends' son.  I was excited, nervous, and very self conscious about it, but I embarked on it.  I felt bad because I was hoping to get it done in half the time I ended up taking for it, but I think it turned out perfect. 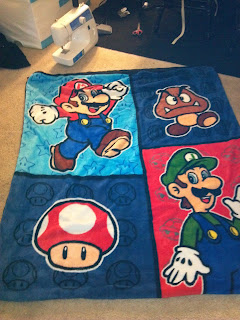 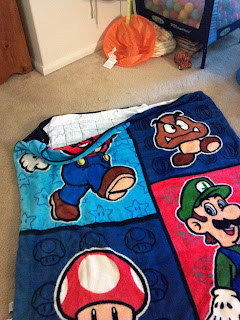 It is a duvet cover with the weighted blanket snapping on the inside.  It was the first one I had made like that, but I like it.  I have to give credit to my friend that the little boy's mother, they are the ones that had the idea of the duvet cover.
I am contemplating opening a store front through Pinterest.com or amazon or somewhere online to sell busy books, weighted blankets, lycra sheets, resistance tunnels, and body socks.  I make a lot of these for my boys, so why shouldn't I be able to help other families out by making them some for cheaper than you can find them else-where?  Plus a friend has been asking me to do so.  I guess the only thing holding me back from it is my self, I'm so nervous that no one will want anything or no one will like what they get, I guess I am a very self-conscious person.

On to the next thing that had been happening, I had a bit of a health scare.  But things are cleared up and it was nothing to worry about, but for about a week I couldn't stop thinking about the worse-case scenario.  Then it turned out to be the best-case scenario and I am thankful for everyone's prayers, they ment a lot and truly helped me through it.

Scott is still on the waitlist for his OT, speech, and language preschool :(.  I was hoping they would have started by now, but I understand there are a lot of children around here who do need the help and it will be his turn when it is his turn.  On the upside, I did hear that he is at the top of the waitlist for the next 12-week session in the language preschool, so that will be starting I believe next month.

Scott is making tremendous progress with ABA, he picks up things so quickly.  He is also becoming more and more talkative; he does still have his days where he barely mutters a word, but on his good days, which are becoming more and more often, he is starting to talk up a storm.  We are still using sign language as a helper, it gives him a visual and kinsthetic input for the words, granted we still do not know very many signs as we are still in the process of learning too.  Through his feeding therapy, he is eating some new foods, granted half the time he will not eat them for us at home, but it is a start.  We have found out that part of his problem with foods is that his gag reflux is relatively closer than most and so the foods need to be in smaller pieces so as not to hit his gag reflux.

Aiden is a gem as always with his therapies and progress.  He is mastering things just as quickly as Scott is and it is getting harder and harder to find things to work on without making him even farther ahead academically of kids his age.  He is getting socially better, at school he has two best friends that he plays with and he has started telling me about them when he comes home when I ask about them.

On a sour note, we did hear back from the school district we were trying to waive the boys into for next year, and they denied us.  It makes sense, they do have a lot of children over there that they need to focus on helping before allowing even more children come it.  It was a bummer, but I completely understand.  The plus is that it seems that Aiden's teacher is working with his ABA therapist on managing and working through his behaviors a bit more.

School is going decently well for me, I am currently in a statistics class and it is kind of keeping my butt.  I always thought I was good at math, I mean I am with the algebra stuff, but when it comes to frequencies, distributions, graphs, and all the various statistical stuff, it makes my head spin.  But I believe I can get through it, just 3-1/2 more weeks until it is over and I am on to my next class.

So I guess nothing really interesting has been going on with us recently, just been kept very busy.

One last picture to say goodbye. 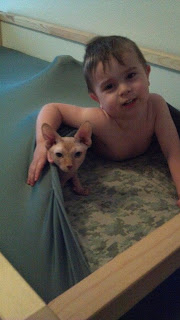