I was talking (texting) my sister earlier, which I need to remember to do more often (its been a little while).  She brought up the blog and how she ran into a friend of ours the other day and they were talking about this. I guess I did not realize just how many people my ramblings got too, but I am glad if I can help anyone in anyway, whether it be some new ideas for the kiddos or something to giggle at.  But her bringing that up made me realize it has been a little while since I posted, and I apologize for that, it has been one of those crazy crazy summers.

Oh yes the sleep, well the boys still sleep a lot, but it is not as bad as it use to be.  Scott did have his sleep study and we got the results, they could not find anything definitive during the study (I could have told them that considering Scott slept at the most 30 mins at a time, that and he kept pulling the electrodes off).  But his pulmonologist said for us to keep a record of any respiratory problems and eating problems that he has for the next two months and then they might be looking at taking out his tonsils and adenoids.  I'm not sure if that is good news or bad news, but I guess it is at least something. 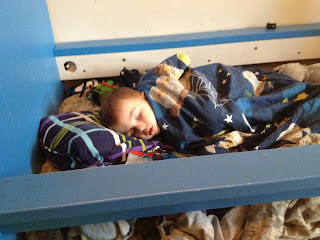 Aiden's meltdowns slowed back to a normal level, as in he went back to having them about as often as he did before the spike in them.  In fact the past few days he has been a bit too "chill" for my taste, I'm kind of concerned because it really is not like him.  I know that sounds so wrong for the parent to be worried when the child is excessively calm, but it really is not Aiden so I'm concerned he might be getting sick or something. 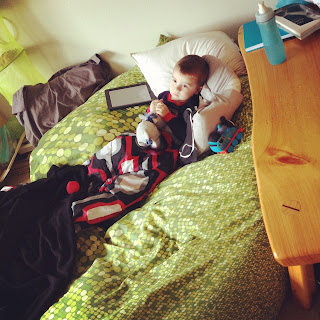 On to new things

Scott had his six month followups with Seattle Children's Autism Center.  That went well, they were all surprised at his progress.  He went from not having very many words and not really noticing anyone around him, to having a lot of words (and a few two and three word sentences) and completing all of the tasks they asked him to do.  He still has a bit of trouble with eye contact, but even that is improving.  They decided to have him followed by the developmental pediatrician there, instead of us going back to the one on post (which is what we were wanting to have done, so that's great!!!).  They even put in for Aiden to be followed there as well, I'm so excited about that.  We get to have both boys seen in early October.

Scott has been doing great with all of his therapies.  He loves each of his therapists, his favorite of course being his ABA therapist, she's amazing with him.  We've been working with him on being okay with water, so that bath time will not be a fight anymore and, since we live around a lot of water, so that he can start swimming lessons.  At the clinic where he gets OT and speech, they have a pool and his OT has been working with getting him in the room with the pool, but he would not move through the door.  Which is fine, we were taking baby steps to get him there and we figured it would be several several weeks before we got him anywhere near the water.  But one day when we walked to the door, another therapist was in the pool cleaning up after her last session.  She decided to roll a ball to Scott, who picked it up and rolled it back to her.  They did this back and forth for a few minutes, each time Scott's OT and I would inch our way through the door.  We got him in the door and got the door closed behind Scott while he was playing this game with the other therapist.  He then got braver and went to the edge of the pool and threw the ball at her.  After that he realized he had been shut in the room, but he was okay with it; he went on to have his full hour long session there in the pool (with no swim diaper on, so by the end of it his regular diaper had swelled up like a balloon).

The following week, the boys' ABA therapists decided that it was a good day to have a sensory day for them (that and it was one of the few nice days we get around here) so we decided to have therapy at the lake and we all had fun.  I owe both boys' lives to a friend, who saved Aiden after he decided to be a daredevil and jump off a raft into a deep part of the lake and save Scott from cracking his head on the concrete when we were all eating at the picnic table.  Aiden's ABA therapist brought her dog (as seen in the picture with Scott), and that was the greatest thing for Scott.  He loves animals, but he is in love with Katee, he kept throwing her sticks, and was following her around until we had to leave (makes me re-think about getting him a puppy to raise and train as his service dog because he opens up so much when she is around, I think it could help him).  Aiden also loved having Katee there.  You know those little bones you can get to hold a roll of the poopy bags and clip to your dog's lease; Aiden kept trying to feed that to her.  He kept saying, "eat da bone" as he'd try to push it in her mouth, it was too cute. 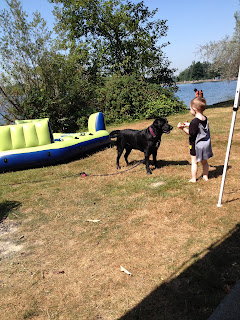 Some more news on the boys is that we decided to go ahead and send both of them to school this year, due to the fact that Eric and I talked about it and we both feel I could use the little break from them; plus Eric (and I, once I let myself realize it), does not want me to take on too much and become overwhelmed.  We just decided to try to get him sent to a different school with a different teacher than he had before, with hope that this new teacher will understand a bit more about Aiden's behaviors (either that or at least listen and let his ABA therapist teach her coping mechanisms).  It was not like he was being bad to be bad, he was just bored because he has known his letters and numbers for a while and was teaching himself how to read and do addition (which he is still doing so we want to get the teacher on the same page).  We get to have the IEP meeting the Friday before school starts, so it's going to be quite a rush getting things all ready to go but it will hopefully all turn out for the best.  We are also looking forward to doing all this again in just a few months when Scott turns three, but then we will be pushing for a bit more support at school.

A very sad thing that is happening this coming week is we have to say goodbye to Aiden's ABA therapist; she got a full time job at the neighboring school district (que sad sad music and crying).  We love her and do not want to see her go, but we knew it would happen sooner or later, but on a good note, we will definitely be staying in touch ;).  We have met one of his new therapists (yes it is taking two to replace her, that is how special she is, not one other person could match up :D) and she seems great, Aiden did fairly well today with her.

On good note, the boys have been getting along a bit better with each other.  At least they are tolerating being in the same room at the same time a little more often. 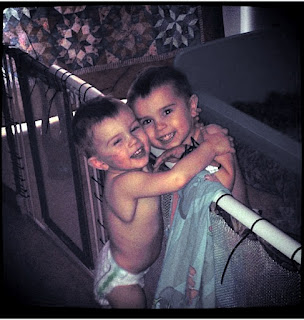 On to how things are going for Eric...

Work is going, I guess, there really has not been much of a change with that.  They keep flip flopping his shifts, one day he'll have the over night shift and then the next he'll be on day shift.  It really is not fair how they treat him, but what can I do.  I know he is getting on a few committees at the hospital, to help with some of the scheduling and regulations, the equipment training, and the education team.  It keeps him pretty busy, but he still makes time for the family and to help out with church.  He is helping with the AVL team at church (he's always been so tech savvy) it's amazing what all he does and knows about mixers and whatnot.  All I know is that when he starts trying to talk to me about all the kind of stuff, my head starts spinning because I have no clue what any of that is.  He is taking leave this month, just to get sometime to focus on the boys and relax away from the hospital for a little bit (that and to study for the promotion board too).  We are not doing anything special, maybe driving up to Forks for my lovely sister-in-law, she's been wanting me to do that since we moved here.

As for me, things are going a lot better.  I am having problems focusing on my coursework, most of the courses I've had lately are repeats of some of the ones I had in my associate's program (using the same textbook and everything) and its just hard to not try to learn more, but I got in trouble with one of my instructors for going a bit too deep in my research (makes no sense to me).  I have not really done much in the way of my projects in the past few days, I need to pick something and start back up.  I am thinking of starting in on some Christmas gifts for my nieces and nephews.  I do need to make the boys some new weighted blankets too, so maybe when they get into school I can have lots of free time to go nuts with ideas.  I miss having my hairless friend help me. 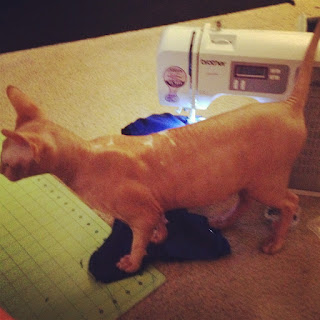 As for health-wise, things are not too bad.  My last test results were normal, which is good, means nothing has stopped working yet :).  I have started to try to change some of my habits around.  I have started trying to build up my endurance (the day at the lake showed me how much my lungs have suffered with everything, and trust me I missed being able to swim for distances).  I am right now just taking it easy and trying to build up to running two miles, I started off at going a mile and am now at 1.60 before I have to take a breather, so not too bad.  The strange thing is that the first few days kicked my butt (especially in the energy department), but now I have lots of energy and no longer feel like crud afterwards.  I am also trying to cut my caffeine intake in half as well as cut out my chocolate snacking.

So all in all, nothing too exciting going on, just been busy.
Posted by Cinnamon at 7:16 PM No comments: