The past month and a half has been ridiculously crazy.  First off it started with a sprinkler line having a screw in it that we took out.  That was fine, we were able to handle that stress.  It was not all that bad, luckily our renter's insurance was going to cover it.  Then our downstairs neighbor decides to call the cops on us at 3am when we were all sound asleep, but apparently she thought that Eric was beating us all.  The cop looked around and was like, what the heck is she nuts.  Then the downstairs neighbor decided to get us evicted by saying she could hear the boys walking across the kitchen at 2pm.  Well, duh we tend to use the kitchen at that time of day and we walk, not run in it and hello its an apartment you are going to hear the people above and below you.  Next thing she does really floored me, she some how got Eric's information and called the hospital, staff duty, and the MPs saying they needed to detain him, would give no reason, just that they needed to detain him.  They all laughed at her, because luckily for us we had kept all of Eric's NCOs in the loop with what was going on from day 1.  This lady has always caused us problems from when we moved in, stating that since we have kids we should know better than to live in a 3rd floor apartment.  It was not like it was our choice, it was the only one available.  Then when she found out the boys are autistic, she started calling them retarded and other horrible names as we would pass her in the hall or in the parking lot.  It was very hurtful, but we tried to be the bigger people and just ignore her, after a while it died down, but the day after the sprinkler line leaked she started up again.  When she called post and everything, Eric's NCOs told us we were moving in to post housing.  We were good with that.  We got word on a Wednesday that we were moving the following Monday, that's a four day notice that we are moving, wow.  But we did it and I think we did a pretty good job.  We are still cleaning the apartment, luckily we have until the end of the month to do that.  The move ended up being a good thing because: 1. we are in a much bigger house 2. it's a house 3. it has a fenced in back yard 4. the boys each have their own rooms 5. the school here actually isn't all that bad and 6. did I mention its a house.  I love it here and yeah its going to be tight the next few months but we will make due.
Since the boys get to have their own rooms we decided to set them up as their individual therapy rooms, that way we could possibly get a little bit of a living room back.
Here's Scott's room: 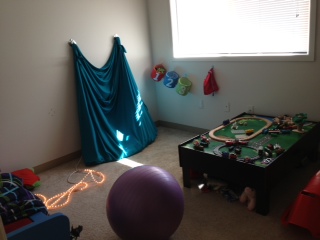 We have his trains, rocking horse, his weighted balls, and the big blue thing hanging in the corner would be his ball pit, and when we get his climbing grips in we will be putting a climbing wall next to the ball pit, too. 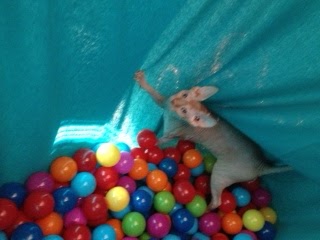 This would be Pinkerton enjoying the ball pit, he likes some sensory input every now and then too.
Also in Scott's room would be his pressure swing. 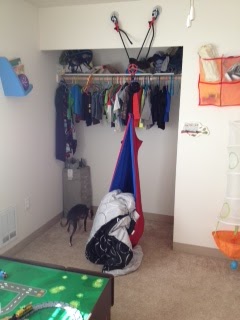 He is actually in there behind the queen size comforter.
Next up is Aiden's room: 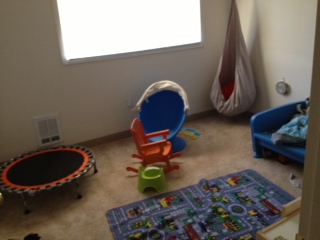 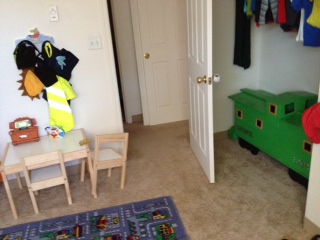 Aiden has his cuddle swing for when he reads, his cocoon spinning chair and trampoline for when he needs to regulate, his drum on the wall for when he is angry so he can hit something that's a bit productive, a little table for work time and his favorite toy chest from Popo, that train.
I believe we did a pretty good job at getting the boys' room to fit their needs.
Then in the hallway outside their rooms we did this: 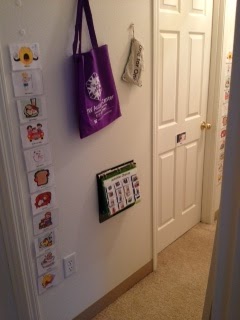 They now have their visual schedules right next to their doors and Scott's PECS choice boards right where he can see them and grab them when he needs them.
This was all done within the first few days of moving in, we figured get the boys' set up for what they need and then we can get our stuff situated.
Oh we also have a little area off from the living room that is suppose to be the formal dining room, but who needs one of those when you have an informal dining room anyways.  So we made it into the play area for the boys. 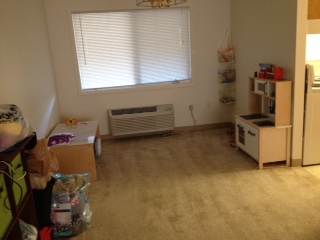 This is where we put the light table, complete with all the sensory items hung above it (I know its not in the picture, but we did add those later) and their play kitchen.  This also serves as Mommy's sewing area, as it holds my fabric and sewing machine in a cubicle nearby.
I have to say I absolutely love the fact that we have room and no longer have to feel like we are on top of one another.  And the boys, they have been amazing through this transition.  I was ready for them to have some pretty severe meltdowns over the first few weeks of all this, but they took it in stride, it was about a week before Aiden had a meltdown, and even then it was not one of his top five most severe ones.  Then Scott had one a day later, his was pretty bad, but when he was done he picked himself right up and went back to work with his ABA therapist.  I also have to say that the boys' therapists have been incredible throughout this whole thing too.  With the uncertainty at first and then the million schedule changes, they have been troopers too.  I am so very thankful for them, they are wonderful to us.
So needless to say, things might have been incredibly hectic a month ago, but they are calming down now and it has been a very good thing.