Tonight I had my online seminar for school.  It was just a normal seminar, going over various speech intervention methods, nothing out of the normal.  Then my instructor asked me a simple question that did not have a simple answer.  It was one that I honestly had not been asked before and I had not thought about what the answer would be in about 4 years.

She asked if I could share how it felt to get the autism diagnosis for my sons.

Such a simple question, but the answer was so much more complicated.

I have never talked about how I felt about either of the boys' diagnosis.  Eric has discussed it somewhat in a one of our first posts here, but I have not.

I feel that if I am able to contribute anything, it would be to let other families know that they are not alone in these feelings, as I know some carry guilt of how they felt in that moment.  I believe it can help to know that others feel the same or similar.

Taterbutt was diagnosed when he was the young age of 16 months.  We had noticed that he stopped being him in a way.  He stopped crawling.  He stopped talking.  He stopped interacting with us, other than screaming when we would touch him.  All he wanted to do all day was sit on the couch, spinning the wheels of a toy car, kicking his feet, flapping his hands, and grunting.  All the while being completely naked.  I could not put even a diaper on him without him screaming like it was burning him alive.

He was no longer the happy, smiling, talkative little guy we knew.  It was like something had taken him away.

So we did our research on what could be going on.  Both Eric and I had experience with autism and knew what some of the signs were.  So we researched through several different sources and kept coming to the same conclusion, Taterbutt had signs of autism.  We printed off the M-CHAT (modified checklist for autism in toddlers), filled it out, and brought it with us to his pediatrician.  The doctor did not think he had autism, he kept deflecting our concerns with, "he's just a late bloomer."  We pulled out the M-CHAT, and all of a sudden his tune changed.  He divulged that he honestly did not know much about autism, but with the score from the M-CHAT he had to agree that Taterbutt needed further assessment.  So, in went a referral for an assessment at the hospital from a developmental pediatrician.

The day finally came, only two weeks later but felt like a million years, for the assessment.  We walked into the room, a big room with lots of toys and distractions.  At first it was just us four, Eric, Taterbutt, Mister Fister, and myself.  Then in came the developmental pediatrician and occupational therapist.  Upon introductions, the developmental pediatrician (we'll go with Dr. S from here on out) told us that because of Taterbutt's age, we probably would not get a diagnosis today.

Four long hours later, with a hand that hurt from having to fill out multiple extremely long questionnaires, Dr. S finally gave us the results.  He told us that we needed to go to the book store and not only pick up books on autism, but also on sensory processing disorder, and oppositional defiant disorder because our Taterbutt has all three.

I knew that was coming, I knew it from the moment I stepped into that room.  But nothing could have prepared me for how I felt hearing the doctor tell us that our son had autism, let alone the other diagnoses accompanying it.

At first, I was happy.  We finally had a diagnosis, we could finally get him the intervention services he needed.  Then came the grief.  The grief over what my hopes and dreams had been for him.  He would not be a typical kid.  We would never be a typical family.  Then the thought of, "well, what about Scott?!"  Then came the thought, "what if I did this?"  I kept thinking, "if I did (insert anything) more or if I was a happier (I dealt with postpartum depression after having Mister Fister), would he be like this?"  I knew deep down that I could not have done anything to keep the diagnosis from happening, but those thoughts still plagued me for a few months after the diagnosis.  Even though I had those thoughts, I still jumped feet first into the world of autism and what to do for Taterbutt to help him.  We got him started in speech and OT, and eventually got the ball rolling for our insurance to cover ABA.  I even decided to go back to school for psychology in an attempt to better understand autism, and therefore Taterbutt.

After a few days, I stopped grieving for the child I never had.  Because, lets face it, Taterbutt is and always has been perfect.  I started seeing him in a new light, and therefore no longer allowed his meltdowns to affect me like they did before.  It broke me out of my own shell and gave me something to strive for.  Eric and I had been drifting apart at the time before the diagnosis.  But then in the aftermath, we found a new hope for each other.  We were not perfect again, we still are not, it is a process, but you keep fighting the good fight and you lean on each other.

Now I would not change anything.  Taterbutt is an amazing little guy.  So talkative, sometimes too much so, or too inappropriate (but hey, that's what entertains me throughout the day).  He loves wearing clothes, they just have to be of a particular fabric, which is fine and able to be done.  He loves to play with others, in fact he will seek them out now.  He does have quirks and is hard to get along with sometimes, and has multiple massive meltdowns a day still, but that is the joy of autism.

And I would not change it for anything.

Fast forward a year and a half from Taterbutt's diagnosis and we have the beginning of Mister Fisters.

Mister Fister did not have as many prominent signs of autism as Taterbutt did.  He did not regress like Taterbutt.  His hand flapping was more hand twisting.  He did not like clothes at all, but could tolerate diapers.  He was a colicky baby, so his meltdowns, we thought at first were just him being fussy*.  He was delayed in speech and language, as well as he did not have eye contact.  He hated people.  Literally hated people, unless you were Eric, Taterbutt, or myself.  Until Taterbutt's newest ABA therapist walked in, he would not warm up to anyone.  Then when she walked in, he immediately climbed in her lap while she was working with Taterbutt.  It surprised me as well as her and her BCBA.
*Side note - I was recently asked why Mister Fister is Mister Fister's nickname.  He was an incredibly colicky baby.  I literally always had to wear him, even in the shower, and that only lessened how much he screamed.  We use to call him Mister Fussbutt, but we figured Mister Fister is slightly more socially appropriate.

After a few months, he still had not warmed up to Taterbutt's other ABA therapist, or his own speech and OT therapists.  Finally, Taterbutt's BCBA asked us if we had concerns over Mister Fister.  We said yes, but that we were not for sure if his behaviors were learned from Taterbutt, or if that was literally just Mister Fister.  She confirmed our suspicions and told us that she had her own concerns over her observations of him.  When we brought hers and our own suspicions up to the boys' other therapists and doctors, they also stated they had some concerns as well.

So we made an appointment with Taterbutt's developmental pediatrician.  We had moved twice since Taterbutt was diagnosed, so this was not the same one who diagnosed him.

When the day of the appointment came.   We were more prepared than we were with Taterbutt's, if that can happen.  The developmental pediatrician did the regular battery of assessments.  Lots of questions and questionnaires for me, as well as observations and tasks for Mister Fister.  After the assessment, the doctor looked at me and said, "I believe he is autistic, but I would like to wait to diagnose him until he is 4 or 5 so I can test his IQ because I believe he is mentally handicapped."  I believe my mouth literally hung open.  I was speechless.  Not that I have anything against it if Mister Fister was mentally handicapped, but to wait 2 to 3 years to diagnose something like autism or a mental disability?  To me I was shocked a doctor would suggest that.  I thought it was better to have the diagnosis early so you can start intervention earlier, so the child can have a little bit better chance at life.

When I told all the boys' therapists what the doctor had said, they were all just as angry as I was.  They also urged me to get a second opinion.  And so we did.

When the day came for our intake appointment with the clinic we chose for our second opinion, we were nervous.  What if they said the same thing the other doctor did?  Should we really be so forward on wanting a diagnosis?  Thoughts like that just kept creeping into my mind the entire time.  Until the psychologist who was performing the intake assessment told me that the previous doctor was a crock.  That Mister Fister had several red flags for autism, but none for having a mental handicap; and even if he did, there are assessments for that at his age of just over 2 years old.  I felt relieved.  My concerns were being acknowledged and confirmed.

Just about a month later we had Mister Fisters official diagnosis, Autism.  Again, I felt relieved.  He was not learning behaviors from his brother.  Even though I believe he was and still is, but that is not the reason for his difficulties.  Both his and Taterbutt's brains process differently.  They are both at completely opposite ends of the spectrum.  They were then, and they are now.

I did not have the rush of feelings with Mister Fister's diagnosis as I did with Taterbutt's.  I believe that is because I had already dealt with all those emotions, I did not need to deal with them again.  Sure was I hoping that Mister Fister was neurotypical?  Kind of, I think everyone does.  Am I sort of glad that he is not?  Heck yes.  Life is so different with a child on the spectrum, in a way it is almost more magical.  It is more full of happiness at the little things and the big things.  You no longer take small steps for granted.  You celebrate more often.  Sure you tend to have more bad days as well, but you learn (very quickly) to not dwell on those.  Because next thing you know, your child is trying a new food, or putting a shirt on they never would have normally wore, or saying hi to a friend unprompted, or just giggling in the incredibly high pitched giggle that no one can match. 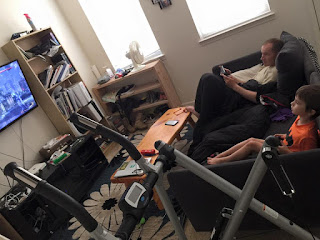 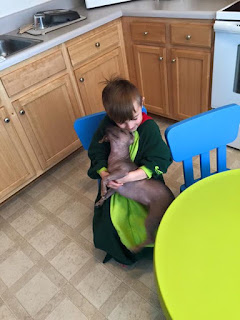 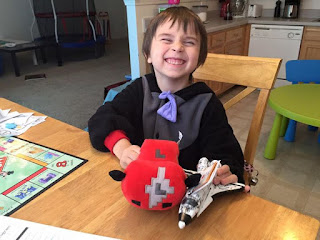 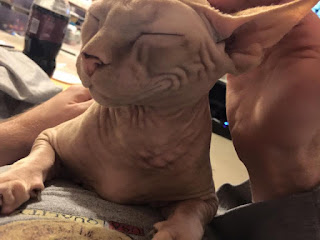 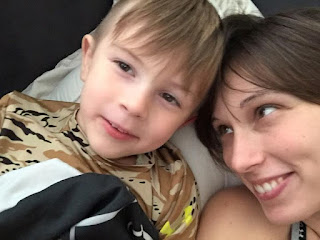 All in all, I am glad that neither of my boys are "typical." What does that mean anyways?  I have no clue.  I know that I was never a typical kid myself growing up.  Eric sure was not either judging by the stories I have been told.  Who, in all honesty, is typical anymore?