I realize that it has been over a year since the last post, and for that I am sorry.  I honestly did not know what to write about, we had not done anything different for the boys, and I did not think my opinion would matter anyways.  A few friends have been nagging me to start writing again, so here goes.

I have no clue where to start or what to even write about.  I am still unsure if anyone really wants to read anything I write, but I am good to give it a try.

This past year has been pretty hectic.  Taterbutt went into Kindergarten, Mister Fister went into his last year of preschool.  I stopped school, well I took a break from it.  I was stressed and I did not know if I wanted to keep going down the path I was heading down.  Now do not get me wrong, Special Education is a great place to be.  There needs to be more and more teachers who understand the special quirks of kiddos on the spectrum, as well as kiddos with other disabilities.  I just was unsure if I wanted to do that.  I felt overwhelmed and I just needed a break to clear my head and think.  I am happy to report that I am back in school, and I will get to that all in a minute.
Eric got brought down on orders and we moved this past March to Fort Bragg.  It was a huge move, I mean is any move less huge, but it was literally clear across the country.  We were all sad to leave the friends we had made the past almost 4 years at JBLM, but we knew it was time to go.
Because of the move, we re-homed our beloved Mister Boots, and it made us all incredibly sad. 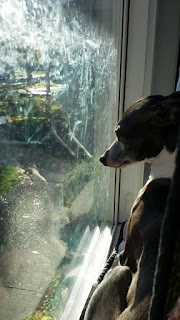 Luckily, he is in a great home with one of Mister Fister's amazing therapists and a good friend of ours.  We get updates about him all the time, and he looks incredibly happy.  The reason we decided to re-home him was, we were thinking about applying for a service dog for Mister Fister and Boots would not do well with a service dog.  Once we got the orders though, we knew that Boots would not be able to move with us because it would be too much stress on his little stressed out self.  We felt it would be kinder to him to make him a home with a familiar face and not move 3,000 miles when he hates cars.

The move has been an incredible thing for all of us.  We had a great trip where we got to see some new friends along the way and have a few adventures as well.  Eric is happier in his new job, just as stressed, but happier that he has a "regular" schedule.  We were able to get a slightly bigger house, which has been nice. The boys are no longer on top of each other, and they have plenty of room to run around in.  There is also a park right next to our housing quadplex and the boys play on it daily.  The new school the boys go to (or went to since it is summer vacation) is amazing.  The teachers they were placed with were incredible at figuring out strategies to work with the boys.
Taterbutt is so much happier here, he actually wants to go to school.  At the previous school, he was in a class of 22 kiddos and it was only one teacher with that many kiddos for a 3 hour day.  I disliked the fact that they would not place him in a full day kindergarten and they never listened to anything that I would say about Taterbutt.  He got depressed and angry.  He would be violent at home and school.  He never wanted to go to school, but could not verbalize what was going on.  Finally, the bus driver noticed that another kiddo was making fun of Taterbutt on the bus just before we moved.  See Taterbutt had been saying that he was a girl for about the past year.  At first we thought it was just pretend, but then we noticed the intensity that he held on to that belief.  He knows the difference between boys and girls, and we never had a problem letting him be who he was.  He would wear tutus and dresses, and he was happy, so we were happy to allow him to do that.  We found out after the move (once Taterbutt was calm enough he started talking to us about it) that his teacher would not let him play with any "girls" toys in the class room and dictated to him that he was a boy not a girl.  I was furious, but we had already moved and the damage had been done.  I just wish I would have been more vigilant when we noticed Taterbutt's aggressive mood swings, but the teachers assured us that everything was fine.  Oh, until it was not.  He ended up getting suspended from school about a month before we moved.  I ended up just pulling him out for the rest of the time once I was told why he was suspended:


In my own opinion, any child would have freaked out at being grabbed from behind without knowledge, but that is just me.
Anyways, I am just glad that we are in a better school.  They are actually doing a behavior intervention plan for Taterbutt from the get go, unlike last school who never would when we asked.  They also accept that Taterbutt identifies as "a girl on the inside," in his own words; they do not abide by gender rules here, which is so nice for him.

Mister Fister is also happy here.  He had great teachers back at JBLM, and he still talks about them every so often.  But they do field trips for preschool here, and he went to the zoo and got to feed a giraffe 3 times.  He talks about that all the time.  I do not think anything is going to trump that for a while.  Just as school was wrapping up, he got comfortable enough to show his teacher his true Mister Fister nature by running around and not being able to sit still or listen to directions.  It was fun when I started getting notes home that said he was easily distracted or he would not pay attention for anything.  On the upside, they already have great strategies to help with that for the fall when he is in Kindergarten.  Oh did I also mention that they are going to put him in Gen Ed as well? No, well he is going to be in a regular classroom with a few push in supports. I was ecstatic that they were willing to keep in in the classroom to work on all his goals.  Oh, also, did I forget to mention that the kindergarten here is full day? Yes, well it is and it is amazing.  All the kinder curriculum is hands on, their science for a month was growing butterflies.  It was all Taterbutt would talk about for months, and it was amazing.

I was so afraid that the move would cause problems for both boys, but in all honesty, it has solved some.  Taterbutt still has aggressive outbursts, but they are fewer and farther between when they happen.  He is no longer depressed all the time, he constantly has a smile on his face.  He is able to verbalize more of his thoughts and feelings with us than he ever has.  Mister Fister is still the same Mister Fister, but he actually plays with big brother now.  He no longer hides from Taterbutt unless Taterbutt starts showing signs of getting upset.  They actually play like typical brothers, and it is amazing. 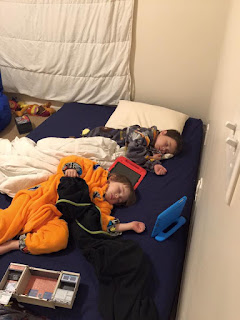 So sometimes moves are scary and cause upsets to, well everything, but sometimes they can be for the better.
The only one who did not have a great time with the move was Pinkerton. 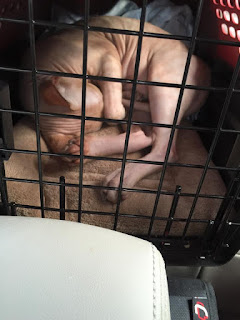 He hated the car rides.  Then when we got to the new house, he would just walk about meowing all the time, which if you know Pinkerton, he really did not meow that often.  We figured it was because he missed Mister Boots, so we started thinking we should look at getting a puppy.  We knew we wanted one that we could train as a support dog for Mr. Fister, but we wanted one that would still be a "travel size."  We looked into various breeds and were looking at breeders, when I thought I would check out some of the local shelters.  We knew we wanted a puppy and did not think I would be able to find a puppy that would fit what we were looking for.  I was wrong.  I was looking through one of the shelters' adoptable animals pages, and I found a litter of puppies that were Chinese Crested/Dachshund mix.  One of the puppies was hairless.  I knew what the temperament of Dachshund's were, my parents have a miniature one and I have been around several.  But I had not really been around Chinese Crested's before.  Once I looked up on several sites what the typical temperament for them is (protective of family, aloof and standoffish to strangers, playful, good with kids, good with other animals, but still have a strong protective streak), I thought that would be the perfect pup to bring into our family.  She would be protective of the boys and playful with them as well.  I thought she would be great to bring into our family and train as a support dog. 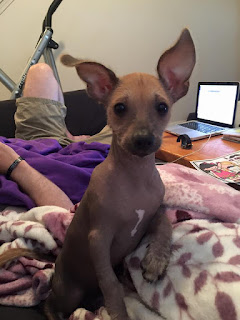 We brought her home about a month ago, and she is prefect.  She is more of a Daddy's dog, but still leans to Mr. Fister already, its like she can sense that he needs her or something.  When we go to the park, she is right behind him and if he goes too far away, she barks at him and tries to herd him almost.  Her name is Hiney, and she gets along great with Pinkerton.  Most of our neighbors now know us as the weird people with a naked dog and naked cat.  And you know what, I'm good with that.

As for school for myself, and Eric.  We both went back to school, right around move day (I know super smart of us, huh?).  Its been great though.  He is doing his associates in Health Care Management, and he actually likes his classes.  I am doing a post-bachelor's certificate in Autism Spectrum Disorders (I know, like I need a certificate in that, I live with two little boys on the spectrum).  I thought this would look better for when I want to get a job.  Through the program I have found that I am incredibly interested in the speech-language-communication side of things.  Therefore, I am changing my plan.  Instead of going for Psych, I am going to go back and do a degree in Speech Language Pathology.  This is not the first time I have thought about that.  Several of the boys' speech therapists back at JBLM would tell me that they thought I should go that route. I gave it barely a thought back then, but now that I have studied speech and communication a little more in depth, it is incredibly interesting to me and I want to learn more about it so I can help more kiddos.  Eric still has the same plan, and I think he is going to do great with it.

Well, I think this just about brings everyone up to speed.  Hopefully I will not let another year go by without posting.  I hope to bring lots of ideas for what we do with the boys to hopefully help others out.  Please ask questions about anything.
Posted by Cinnamon at 11:56 AM 1 comment: