So things are starting to get back to normal around here.  Today the boys actually stayed up to their nap time, but then they did not wake up for dinner at all.  That is still better than them falling asleep at 11am and sleeping until 4am the next morning.  I am hoping this is a sign that they are slowly getting back on their schedules.  I do know that Aiden has been showing a lot more behaviors lately, he's been having more and more meltdowns.  It has been a while since he has been like this and I am getting a little bit worried about it.  I have been racking my brain as to what could be triggering these meltdowns and I am not coming up with anything other than his goals have become harder, but that is the normal course of things.  I just do not get why that would all of a sudden cause the increase in meltdowns because he never had a problem being pushed before.  Do not get me wrong, he would always have some things to say, or scream, but he would not have a full out meltdown do to it.  Anyways, that being said, the boys have not been on the best terms with one another for a little while; but today they were in good moods when it came to each other.  They were running around the house laughing and babbling to one another, it was just too cute.  Scott has been becoming attached to carrying a blanket, or as he says a "be be," with him, but he gets upset and frustrated because either it will not stay on him while he is walking around or sitting at the table or it becomes too heavy and bulky for what he is trying to do.  So with this and the fact that when he is wearing his compression outfit, either the SPIO one or the one I made, I call him super man, because that is what he looks like, like he's wearing a super hero suit. 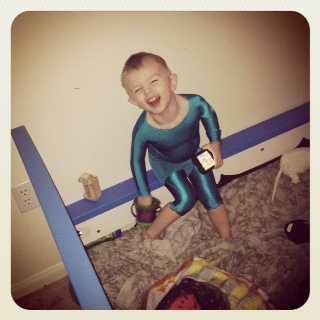 This got me thinking about capes, so I made the boys their very own super hero capes. 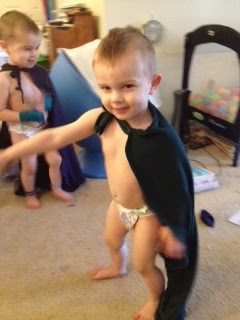 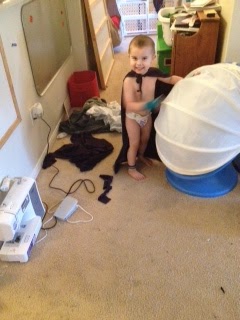 They loved them, they ended up sleeping in them it was too cute.  But it did the trick, I figured for Scott it would kind of be like a blanket that is just tied to his back, and that's exactly what it was.  When Scott started getting tired, he laid down on the couch and turned his cape around to look like a really long bib and cuddled under his "be be;" it was great.  For the longest time after I put their capes on the boys just spun, around and around, holding their capes out and watching them fly behind them. 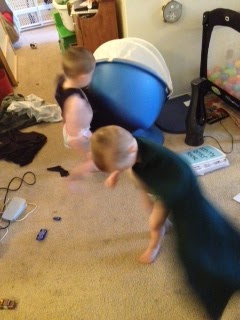 They were doing this all over the house, just spinning everywhere, it was making me dizzy watching them.  Needless to say, they were having a blast and it has been a while since they have been this happy, let alone this happy sharing the day with each other. I am hoping this happiness with each other continues through the weekend because we have a busy and fun weekend planned for the boys.  First off, Saturday is Rhubarb Days over in Sumner, I cannot wait it has been a long time since I have had a good rhubarb pie, or rhubarb period.  I cannot wait to let the boys try some and see if they like it or not.  Then Sunday after church we are heading up to Issaquah to the train museum for Day Out With Thomas.  That is the big one that I cannot wait for, we get to ride on a life size Thomas steam engine, I cannot wait to see the boys' faces, I think they will be excited; esspecially Scott, Thomas is his favorite.  With that being said, I need to get back to my schoolwork, I want to get it all done before this weekend, that way I do not have to worry about it and can have a much needed break.
﻿
Posted by Cinnamon at 9:46 PM