So this week went rather well.  (One of the better ones we have had)
It started off with both boys in amazing moods, Aiden sensory investigative, which is amazing, and Scott incredibly talkative, which I love hearing his voice.
Now if we talk about Aiden at school, it was not a great week.  He only went Monday and Tuesday due to having appointments on Thursday and Friday.  Monday his teacher called me to let me know that, "it was the worst day we have had with him."  But I have to admit he was doing amazing when he was at home, so I am not sure what was going on at school to make him act out like he was.  Hopefully it was just what had to give because he was having a great time at home.
I feel bad because Aiden acted out during ABA on Tuesday, Wednesday, and Thursday, but was great during it on Friday so one of his therapists did not get to see him on his best days.
Friday we had a GI appointment to try to figure out his diarrhea/constipation cycles and to see if we could get some allergy testing so we could see if that had anything to do with it. Just Dada and Aiden went while Mister Scott and Mama had one on one time.  But the GI doc did not want to do allergy testing and said Aiden has toddler diarrhea and that he might grow out of it at the age of five or six.  I do not agree (I get that the doc went to school for this and what not) I just do not feel that that is all there is to it.  How the heck am I suppose to potty train him when he is either exploding out of his butt or not able to go period.  Let's just say we are looking into finding another doc who might be a bit more willing to figure out a way to stop this vicious cycle.
Scott stayed talkative all week long.  He was trying new words and everything.  He even told me, "I wuv oo"  last night when I put him down to bed.
I even found the key to turning this: 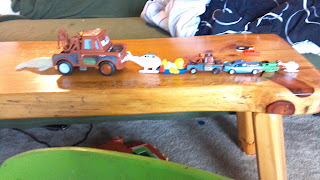 Into him helping me in the kitchen: 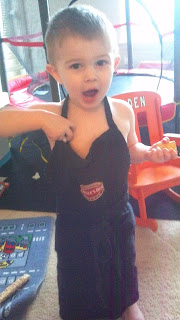 Now dont make a fuss when I tell you the secret...It's coffee.  He wanted me coffee Friday morning, so I let him have half of my cup in his sippy (it had a bit of sugar and milk in it and by that time it was ice cold too).  He loved it and tried to get me to let him have more.  Before the coffee, he was having trouble focusing on one thing, he was everywhere, and lining all of his toys up like a pro.  The after the coffee, much calmer, did not mind that the dog knocked his row of cars all over the place, and was helping me make lunch and supper.
Now to the best part of the week: Scott's ECHO paperwork went through!!!!
That is amazing, I am so glad it did not take as long as they had originally told us it would.
I let the lead ABA therapist know and she sent in the referral to get it started and hopefully late next week we can get his intake done.  Yay!!!
Think that was a great ending to the week, add this, we got Scott's referral for his oral function therapy in the mail yesterday too. Amazing!! Now he can start both of his therapies.
To celebrate, we had dinner, a movie, and new toys for the boys.
Yes, I know, I spoil the boys.  But, honestly, who can blame me for these cute little guys and all the hard work they do?
Posted by Cinnamon at 3:05 PM