I really need to set alarms for updating this.  Life kind of happens and I forget to write about it.

The ball pit has been going really great for the boys.  And on the plus side, its been holding up, I have not needed to redo any part of it, yay!!!

So what has been going on since the fun of making the ball pit?  Quite a bit; we found out that Scott is allergic to blueberries, eggs, and chicken; Aiden has had a little bit of cardiac drama; and we have been looking into private schools for the boys.

Allergies are no fun for anyone, let alone a 4 year old who breaks out in hives when he eats his favorite breakfast food, scrambled eggs.  Did you know that allergies and allergic reactions can be acquired.  I mean you can become allergic to something that you have been eating every day.  I did not know that, but one day while Scott was eating his breakfast of scrambled eggs, he broke out into hives.  Luckily, Eric was there and immediately gave him some benedryl so the reaction was kept to a minimum.  We tried him tentatively on some chicken, because we were unsure how he would react to that, I mean the eggs do turn into chicken, right?  Well he broke out in a rash with that as well.  So Scott cannot have chicken or eggs, which are two of his favorite foods. We also found out that Scott cannot have blueberries, by him eating a few thinking they were grapes and again breaking out into hives.
After talking to Scott's doctor we made an appointment at an allergy clinic to get him officially tested, as well as to talk to the allergist about anything else we should maybe keep an eye out for. They tested him for the basics: nuts, wheat, soy, dairy, eggs, etc.  He had a 3 out of 4 reaction to eggs, so definitely highly allergic to these little things.  He cannot eat anything that has any eggs in them and we have to carry eli pens with us just in case he has a reaction.  Problem is, eggs are in everything, and even if I make our own food at home I have to find substitutes for them.  I have tried flax seeds and tofu, but the flax seeds make anything I bake flat and the tofu, well good luck trying to get Scott to eat anything with that in there.  I felt horrible for Scott, he could not have his two favorite foods anymore (eggs and chicken nuggets)  and we were having to change a lot of what he did eat.  I mean I had to change his cereal, his granola bars, his crackers, his raviolis; like I said eggs are in everything. So Eric and I began researching other eggs and if they are conducive to people with egg allergies.  We found a place here in Tacoma that we can get duck eggs from, although they are a bit on the pricey side, but I am willing to try anything and everything I can to help make this adjustment better for the little guy.  I talked to the allergist and since Scott is not allergic to duck and they are from two different animals, he said we could try Scott on duck eggs.
Let me tell you, I was skeptical at first.  I thought duck eggs would taste differently, I mean chicken and duck taste completely different.  But to my surprise, they taste just about the same when scrambled, duck eggs are just a bit creamier.  Now when baking with them, duck eggs are a bit firmer, which is fine, most of the time my recipes need that.  The problem is that duck eggs come in different sizes.  In one dozen we can have some that are almost triple the size of a regular egg or some that are right at the same size, so I have to measure them out, I use 1/4 cup equalling one egg in a recipe.  Once we figured all this out, we were golden, Scott can have his scrambled eggs or waffles in the morning again, and I can bake muffins, cookies, pasta, etc for his lunch and suppers.  We have been doing this for about a month now and things are great.  Scott almost does not miss his chicken nuggets, I still need to find a substitute for these when he asks.

Now on to Aiden.  About a month ago we were called from his teacher saying that Aiden had a seizure at school.  This was odd as he had just been discharged from his neurologist in August for having no seizure activity.  We made an appointment with her anyways to get it checked out as what the teacher and nurse described was unlike any of the seizures Aiden has had in the past.  They said that he all of a sudden started saying he was tired and cold during lunch and then he started of flopping around for about 30 seconds and then took a bite of his lunch and was fine.  They took his temperature and it was normal so it was not a febrile type episode, we just did not know what it was.  He ended up sleeping for 4 hours afterwards and had the hiccups for about 48 hours afterwards as well.
When we met with the neurologist the very next day, she looked at him and then took our account of everything.  She was certain it was not a seizure, thankfully, but that she thought it was a cardiac episode.  Okay, so we went from what's going on with Aiden's brain to his brain is fine, but there's something wrong with his heart in about 24 hours.  It made this Mama very anxious and worried.  We made an appointment with a cardiologist as soon as we could.  They did an EKG and it turned out his heart was fine, but that the cardiologist said it did sound like it was a cardiac episode.  She mentioned that we could do more tests, a longer EKG (Aiden had barely tolerated the five minute one they had already done) or an echo.  She also mentioned that the episode could very well be an anomaly and might never happen again.  We decided that we already subjected him to enough and that if the cardiologist did not think it was worth stressing Aiden out over more tests, then we were not going to do them.  I still wish we knew what happened that day, but at the same time am thankful that Aiden is healthy on all other accounts and I hope it will never happen again.

Shortly after all of this, we had the boys' birthdays.  We decided to have some friends over this year to celebrate.  I was incredibly nervous, I have never held a party before so I was afraid that it was going to end up being boring for everyone or something like that.  I mean its not like we have a ball pit or anything that kids would love playing in, right?  I think it ended going pretty well.  The boys had a blast, as did all our friends.  When we asked the boys what they wanted Scott said no, he's in that stage at the moment, but Aiden said he wanted a blue tutu. 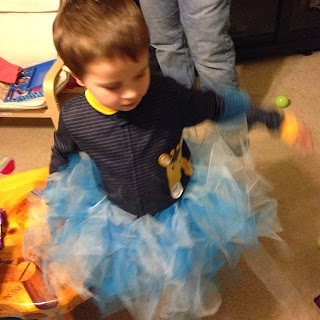 He gets to pick a dress up outfit to wear when he goes potty at school, he teacher sent a picture of his favorite one home, it happens to be a pink tutu. 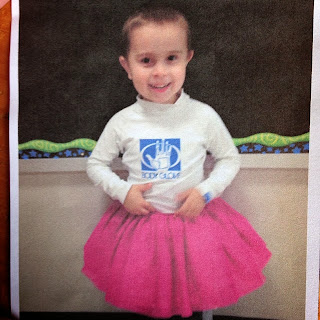 Aiden also says that he is a ballerina and will twirl around the house, it is really cute.  I did make him his very own blue tutu, and he wears it everyday when he has been good.  Next month we are also looking at signing him up for ballet classes at the Tacoma City Ballet School.  I think we did good for his birthday.  Scott got a Captain America shield blanket I made, I made one for Aiden as well (a big stop sign). 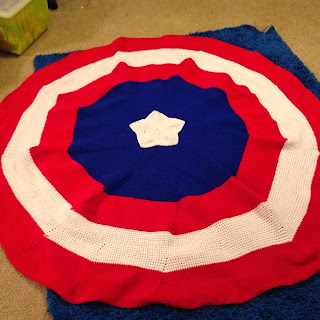 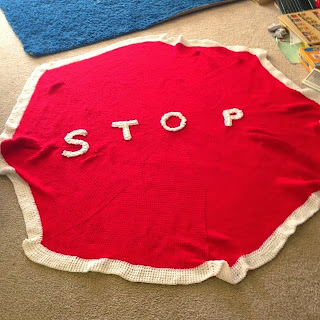 Scott also got a brand new lycra swing/hammock that he plays trapeze artist on all day everyday.  We are also looking into sending our little monkey (AKA Scott) to climbing school at one of the rock gyms in the area. 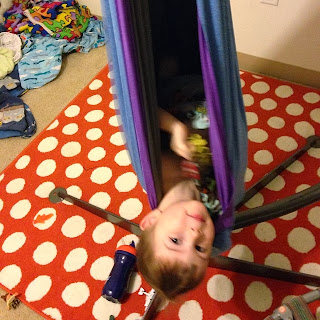 Now for the private schools.  We all hear of the kids on the spectrum getting lost in the public school system, or of the kids that are placed in a special education program who just get left there and no one actually teaches them, we are afraid of this happening to both boys.  I think every parent is.  Aiden is so advanced academically for his age, I mean he reads encyclopedias for fun, and Scott is reading already and so smart, it takes him two weeks to learn any think that we throw at him.  They are both incredibly intelligent, and Aiden's teacher knows that and is wonderful with him, but even she has mentioned her fear of him getting placed in the special ed kindergarten next year after his first behavior issue in the gen ed kinder.  Then Scott, who's teacher had a little bit of an issue with him wearing his under armor to school and I do not feel is challenging Scott.  I feel next year Scott will be bored and either act out, which is definitely not him, or will regress because he is not getting challenged.  So we have been searching out private schools in the area, and I think we have found the two that the boys will go to next year.  Yes, I said two.  Aiden and Scott have completely different learning styles and needs, they need two different learning environments, therefore, two different schools for them.  Now in terms of affording them, tuition assistance is the only way.  Some of the schools we had looked at charge $20-40 thousand a year for tuition, for their kindergarten classes, let alone for the remaining 12 years of school.  Wow, we do not even make that in a year, so we are definitely looking into financial aid and anything that can help us afford these schools next year.

So the past few months have been quite the whirlwind of emotions and stress.  I promise to try and keep up with this so my next posts will not be quite as long.

Oh the boys made some thankful placemats at school for Thanksgiving.  To brighten everyone's day up, here is Scott's: 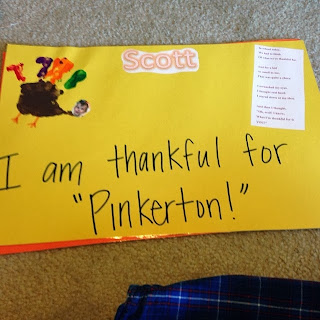 It's of course not Mommy or Daddy, its his favorite naked cat: 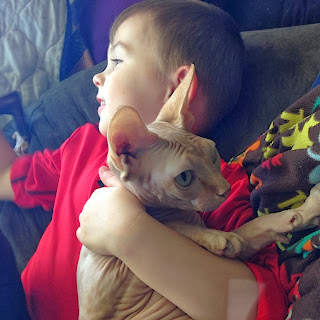 I have to admit, these two are attached to one another.