I thought I would add in how we made the climbing wall as a separate post.
The climbing wall is a success.  The boys love it!
We did not have any plans for it, we just kind of winged it.  Well I say we, we had a little bit of help in the form of the boys' Gigi and Popo supplying the grips and gift cards that supplied the rest (those were meant for us to us for us, but of course we used them on the boys) and a friend of ours helping Eric hand saw and put together the frame. 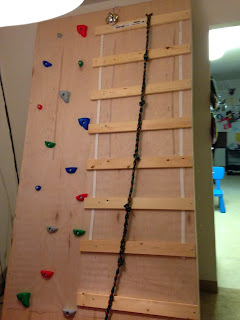 This is the finished project. What is shown is a 4'X8' sheet of plywood, we thought our ceilings were 8' tall but they are more like 7-1/2'.  I'm okay with that because now it can be slanted really easily for the boys and Aiden cannot knocked it down on himself of others.  The frame behind this front piece of plywood is four 2"X4"s and a 2"X6".  Eric cut the 2"X4"s to have a box behind the plywood.  He has three running the length of the plywood, two on the edges and one down the middle.  Then he cut the remaining 2"X4"to fit on the shorter edges.  The 2"X6" is on the back of this at the top and bottom along the shorter 2"X4"s.  We had planned to use these to attach the climbing wall to the wall, but ended up not needing them.  The grips are bolted on the plywood in a random array, we did not look up any route plans for them or anything.  Then we decided the other half of the climbing wall could use a rope, so that's what it got.  We had some smaller rope that we braided and knotted so the boys can climb.  The boys needed something to help them grip when they climbed up the rope, so we thought we would add some wooden slats for their feet.  We ended up having some in the shed that worked great, so we added those.  Now behind all of the grips and the slats we have some rubber anti-slip mats that are for carpets, but it helps with little toes on smooth plywood, too.  Oh and we have some bells at the top in the middle, one of Scott's ABA therapists made that suggestion, and its great, they love ringing them. 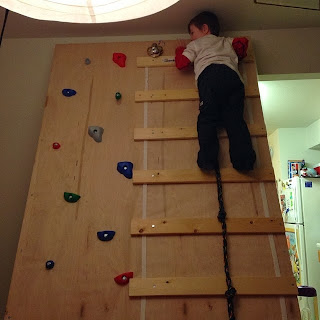 Scott climbs all the way up to the top to ring the bells, and then he slides down and does it again. 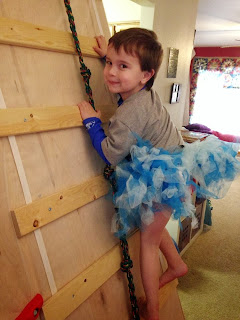 Aiden, or as he is calling himself today, Ballerina loves climbing, but he is a little more unsure of the heights.  I'm sure he'll be tackling this wall in no time and then maybe we'll look into some climbing gym memberships for these guys. 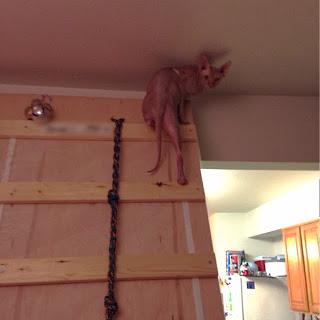 And yes the boys are not the only ones enjoying the climbing wall.  Mister Pinkerton sure loves the height of it (and the fact he can escape the dog).
Posted by Cinnamon at 1:52 PM