I know I said I would update this a little more regularly, and I apologize (yet again) for slacking on that front.  Life just sometimes gets ahead of you and you feel like you are drowning trying to catch up.
School is back in full swing now, which is great.  The boys are doing great.
Scott's therapists are starting to hang back and let him be more independent, which is fabulous.  I love that my little guy is able to participate in the social groups with little guidance now (he still has to have help staying focused from time to time).  He has started to officially rock climb at OT, which is great and he loves it.  I want to get him to go to some climbing classes this spring, I think it will be a great outlet for him.  Also, Scott has been talking a lot more lately.  He's always surprising me with new phrases, or incredibly long sentences.  It's amazing to see just how much he picks up on (he knows more about anatomy than I do, as he has been helping me with my homework this past week). 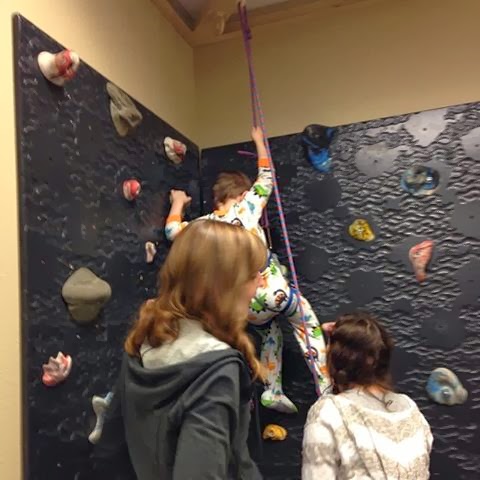 Scott climbing away during OT.

Aiden's doing great as well.  He started speech therapy again.  We just got done with all the evaluations this past week, so Tuesday I will sit down and talk with the therapist to find a plan of attack to help my big man out with social situations.  So far the therapist has said that Aiden has all the higher level thinking and intelligence, but he just seems to have issues organizing his thoughts.  This makes perfect sense because most of his conversations are jumbled around.  He has all the working mechanisms and what not, he just needs help with organizing them so he can have a fluid conversation.  This is why when he gets really excited about something, he starts flicking his fingers and he'll either get stuck on one part of it, or he'll start talking about five different parts of it.  But when he has the particular item or picture, or whatever he is talking about, in front of him, man can he tell you every detail about it.  So we are moving to have visuals for every thing.  We have started to have a visual schedule for him again, it has helped him with a little bit of his anger and frustration.  We also put up a visual "House Rules" poster, which will hopefully help with keeping Aiden from beating up on Scott.  But I am excited to see what other thoughts the speech therapist has to help him out.  I want everyone to see how amazing my big guy is. 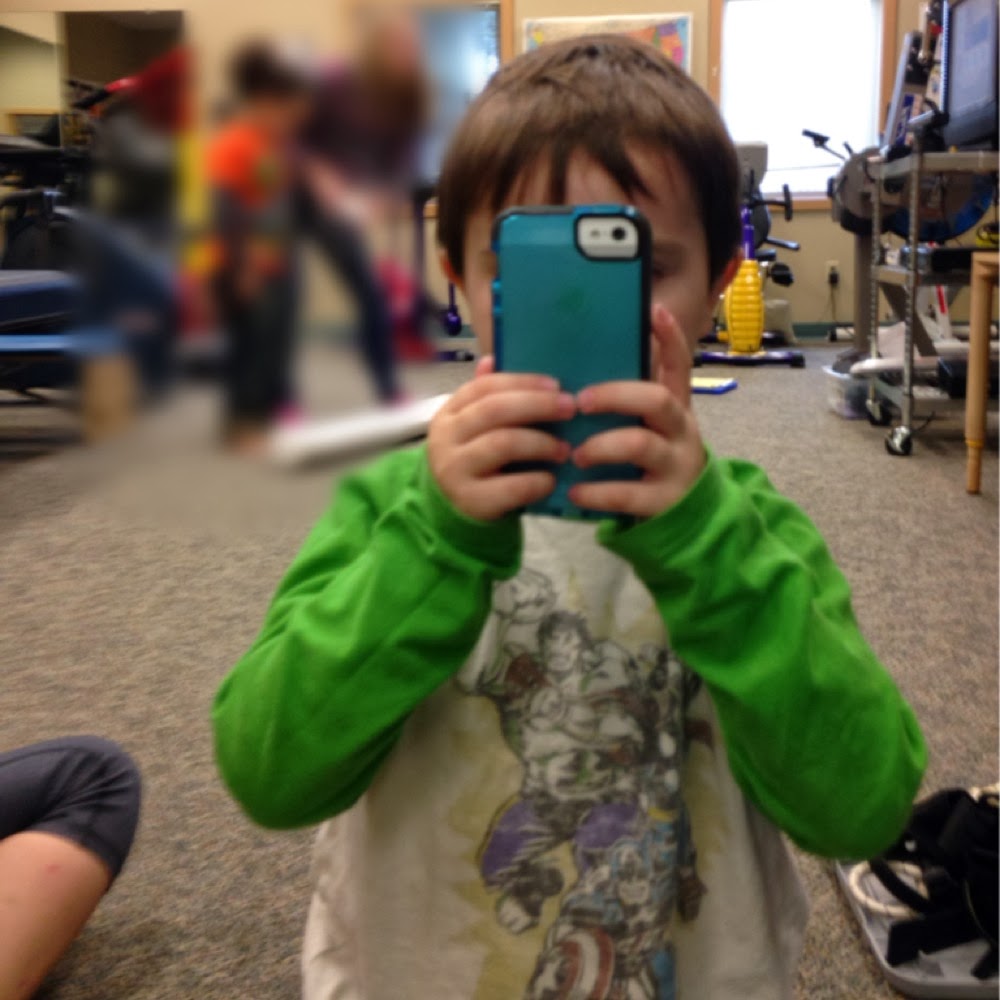 Aiden being the stud he is and taking a selfie.

Last weekend we were able to take part in the pilot program for Wings For Autism here at SEATAC through the ARC of King County.  It was an amazing experience.  I truly loved every part of it.  The boys had fun and really did not have too many upsets (at least not as many as I was prepared for).  Scott still had an anxiety attack when walking up to the plane's door, but the first officer coaxed him on by letting him talk on the intercom.  Then the pilot was allowing the kids to go up to the flight deck and push buttons, Aiden made a couple of alarms go off.  Then we were "flew" around the runways for about 30 minutes to allow all the kiddos to hear what the engines sound like and everything.  It was one of the best experiences I have had.  I truly hope they are able to do this more often as I know several families will benefit from it.  I wish we were able to stay for the reception after we "landed" back at the gate, but Scott accidentally had some cookies that had egg in them, so we had to go get him to some benedryl before he had a full on reaction. 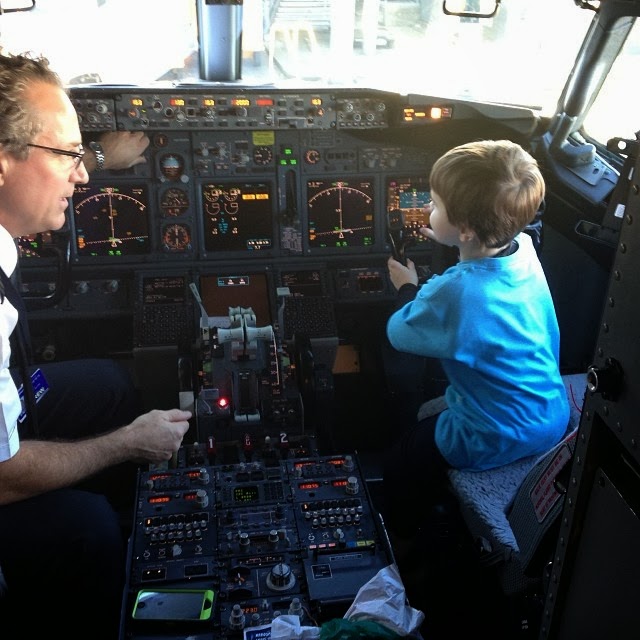 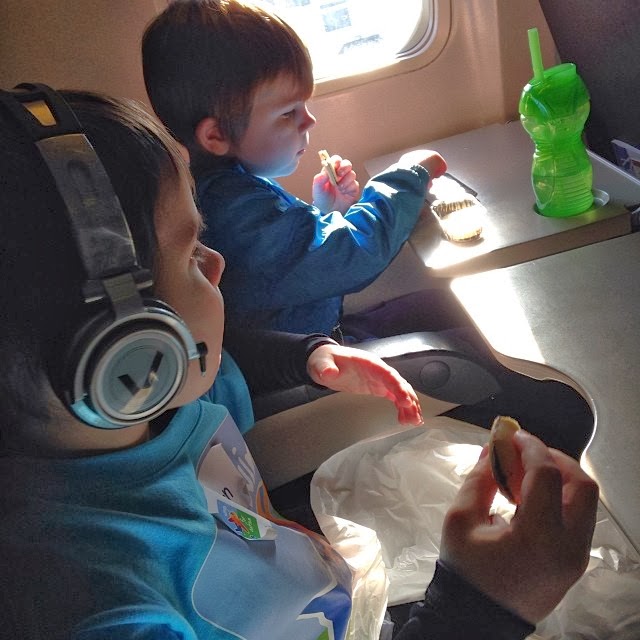 This was them eating the dreadful cookies with eggs (mommy didn't check the packaging :/) 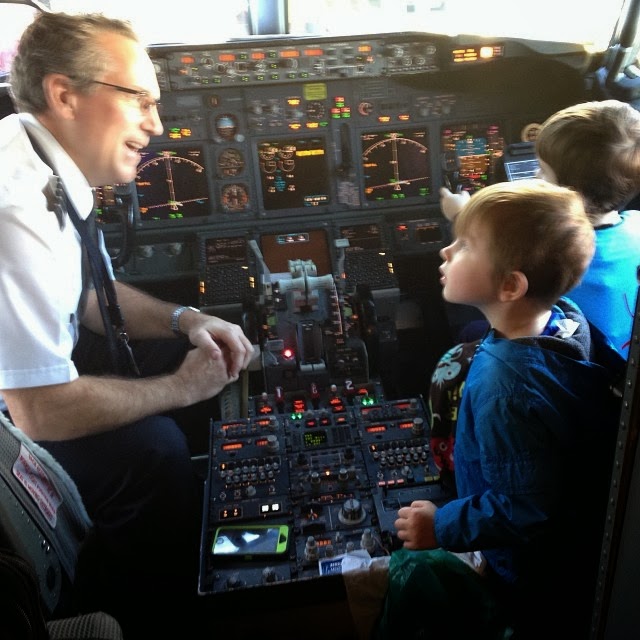 Learning about all the pretty buttons. 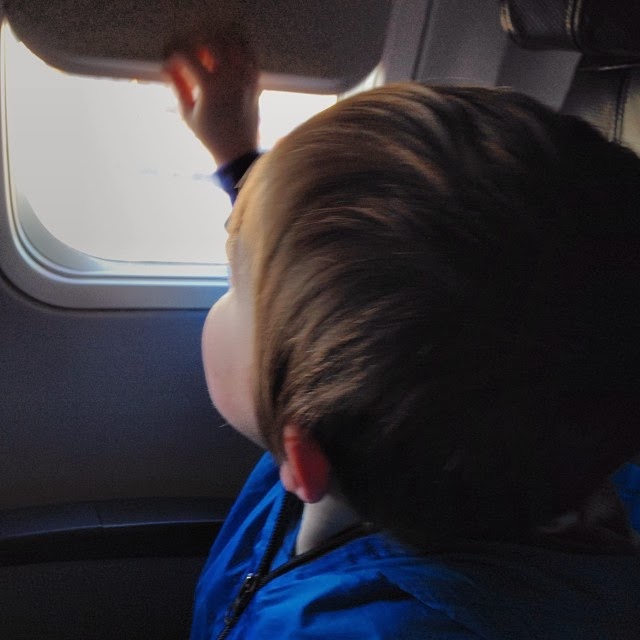 Scott was playing with the visor with daddy. 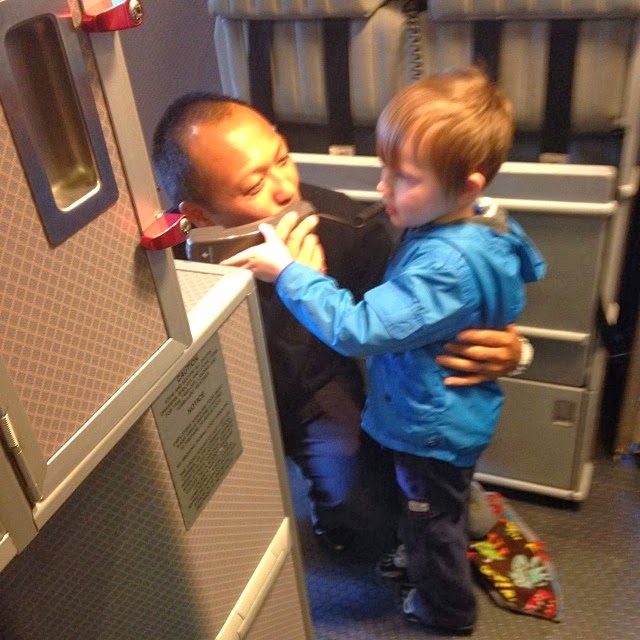 This is the man who coaxed Scott on the plane, I am very grateful for that. 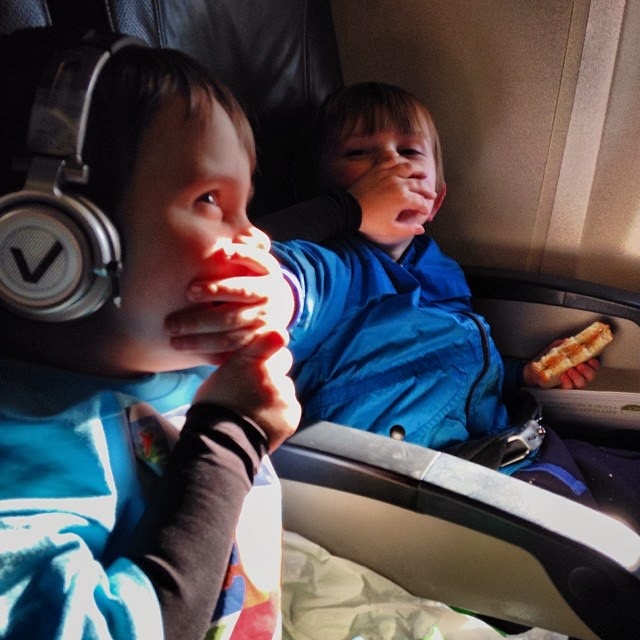 The boys were hushing each other. 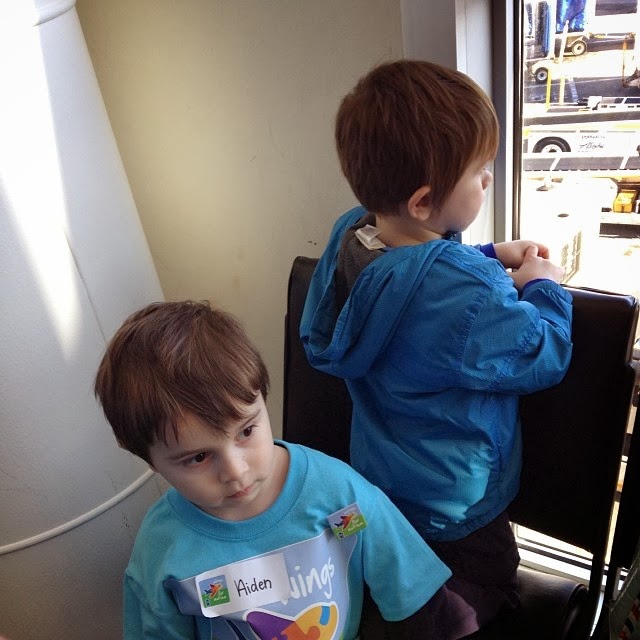 This was them waiting patiently for time to board the plane. 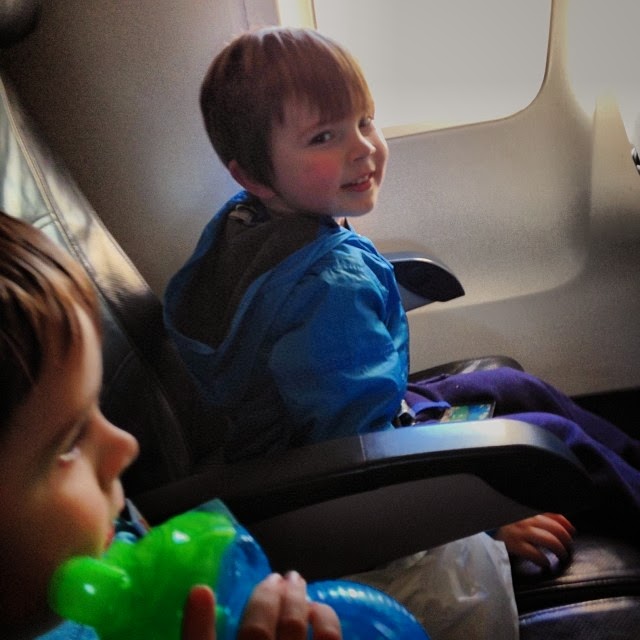 This was soon after we realized those cookies had egg in them, can you see the bright red cheeks?

Fast forward to this past week, which has been a busy one.  The boys and I made some baked cotton balls that we had some fun smashing up all over the kitchen.  Then our beloved Mister Pinkerton got sick.  We found out that because our schedule has become increasingly busy and we are not home as much as we used to be, Pinkerton has become depressed.  Sphynx's are a very sociable breed, they love people and playing, they do not like being alone.  I thought Mister Boots would be enough, but it seems that old age is catching up to the poor pup and he has become rather cranky toward Pinkerton.  So we have started researching and contacting breeders, we are going to adopt another Sphynx!  Why another hairless cat? Because with Scott's allergies and lung issues, we do not want the cat fur to cause any issues, so another hairless kitty to the rescue for our very loved and pampered Mister Pinkerton.
Now you might be asking what does getting another cat have to do with sensory or autism.  Well it doesn't really, other than Pinkerton being Scott's best friend and the reason Scott does pretty much as well as he does.  Pinkerton is who helps Scott calm down when he has an anxiety attack or when he is scared because he's sick or coughing a lot.  Granted, Pinkerton does not always do this by choice, sometimes it Scott who grabs Pinkerton off the counter or the PS4 (Pinkerton's favorite heating pad), but he deals with it, no fuss no muss.  He is the best thing that has happened to Scott, and I will do whatever it takes to keep him a happy meowing little fella. 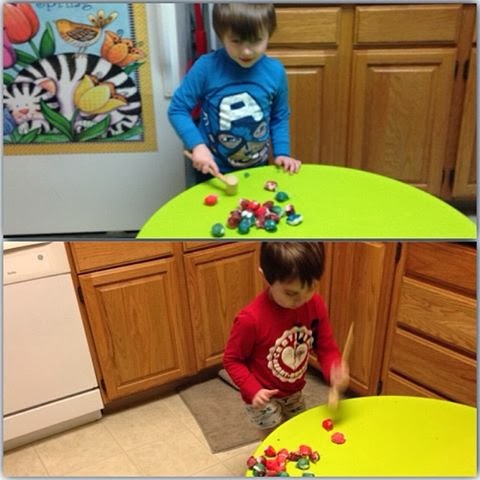 Pounding out some baked cotton balls. 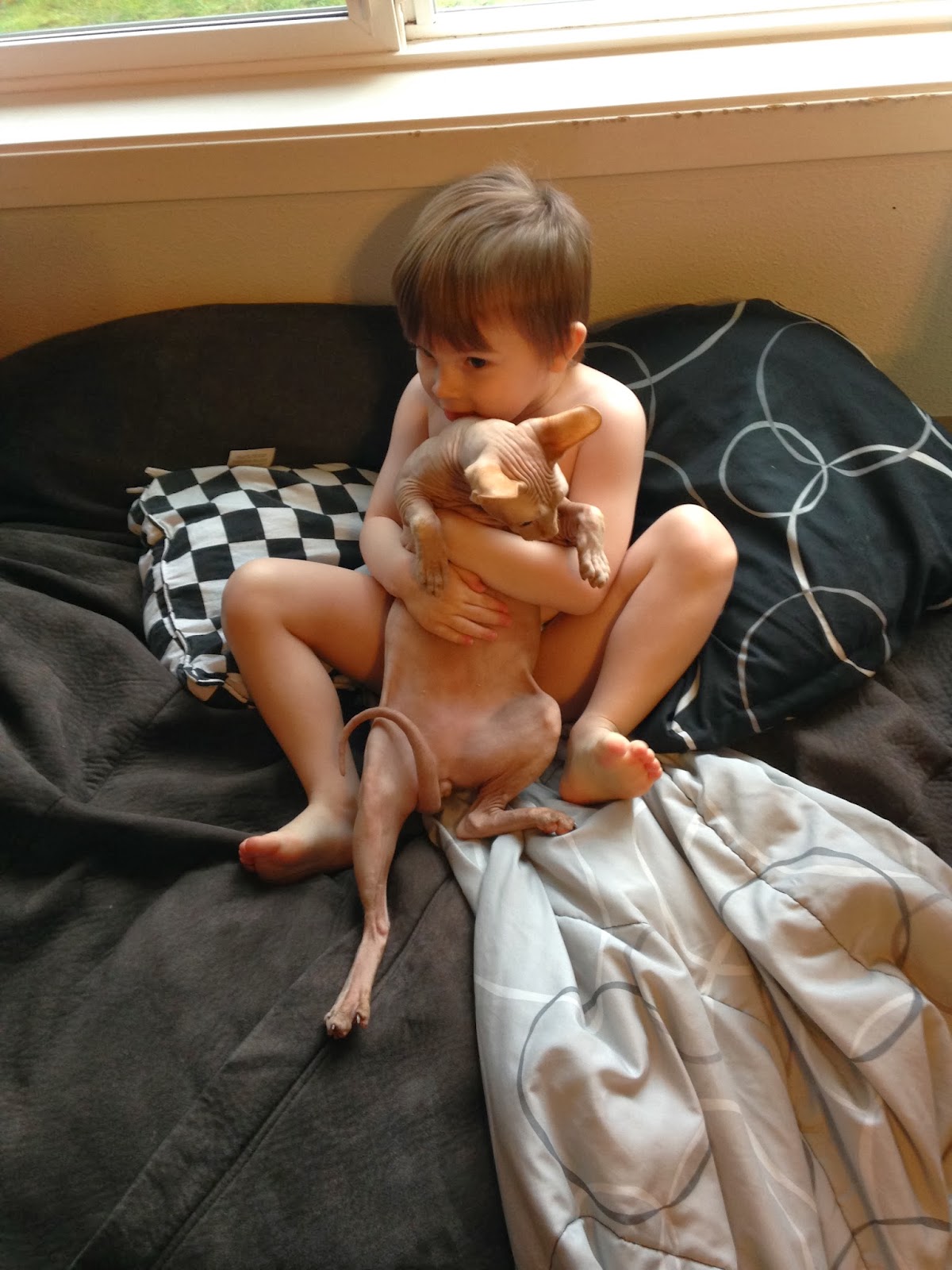